The Tiji festival is one of the most famous annual events of the upper Mustang region and celebrated in Lо – Manthang (the Lo – kingdom). This festival is celebrating to mark the beginning of a new season and always held in the spring season. Mustang Tiji festival dates will release according to the Tibetan calendar. This festival is celebrated to chase away the demon spirits, bring prosperity and happiness into the kingdom. Besides that, there is a massive gathering of monks and people of Mustang on this auspicious occasion is held annually. Furthermore, various dances act, religious events, rituals ceremonies carried out during the three-day celebration of the Tiji festival. The Mustang Tiji Festival Trek can conclude both eastern and western routes depends on the duration of the holiday.

The myths are still re-enacting throughout the Tiji festival. The historical legend all about the Mustang Tiji festival starts with a deity named Dorje Jono. He battles with his demon father to save the kingdom of Mustang. Although the demon creates the water shortage in the country, which affects the lives of the people, finally, Dorje Jono defeats his demon father and brings prosperity to the nation.

Moreover, the festival is the representation and portrayal of the story through dancing and many rituals. The same ceremony is enacting until now. Another reason, this rare, untouched heritage, and culture of the people of Mustang is a beautiful and unforgettable sight to observe.

The Tiji Festival & its history

Tiji festival, therefore, converted one of the main festivals of the Upper Mustang region. The country at the time was thriving and plenty of food. Also, the Buddhist religion observed and made large monasteries as well as born the great teachers. The faith and prosperity can still be visible in most villages of Upper Mustang in the form of dzongs, monasteries, big houses, and private chapels as evidence of this golden age. 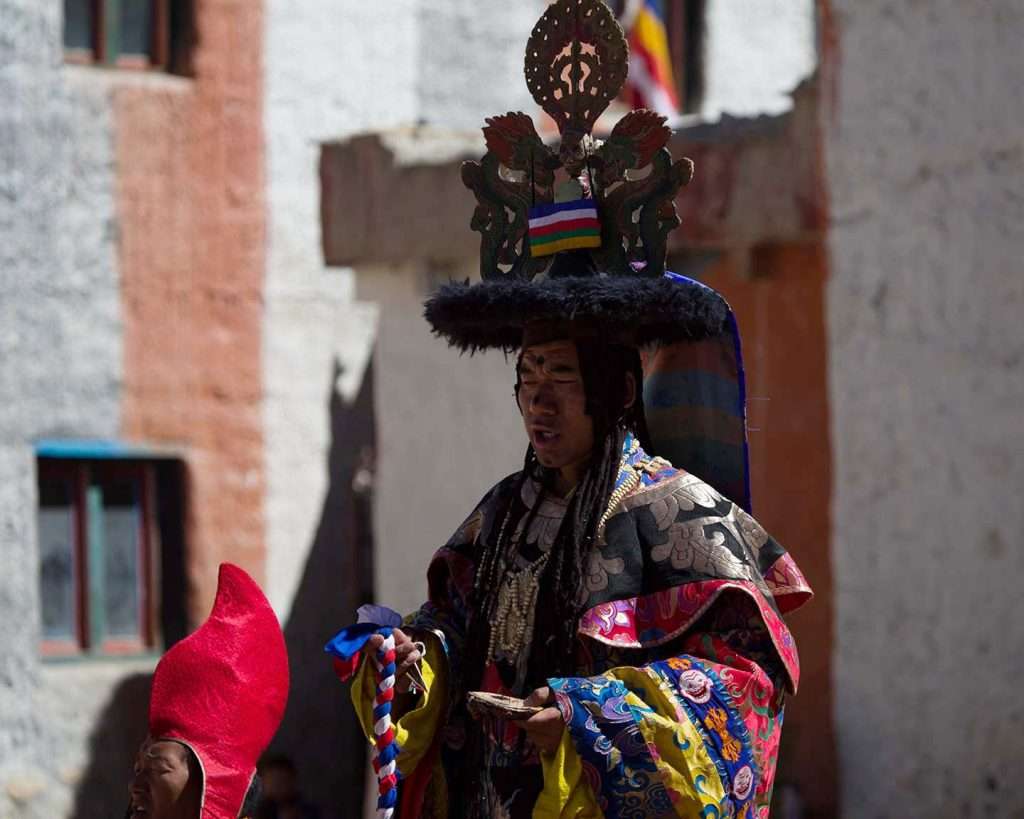 The 15th King of Mustang, Ahang Jampa Dadul, (enthronement approx. 1816, died 1837) the country of Lo witnessed unrest and economic downfall during his reign. The queen was also not capable of bearing a son, so to appease the gods and remove obstacles to the Buddhist religious traditions. Ngchen Ngawang Kunga Sonam, a great Shakyapa master from Tibet, was invited to visit Lo. At Tiji festival, this master is to have to perform the masked dances as the principal dancer, or tsowo. Folklore describes a mound outside the walls city of Lo-manthang. The great master used the arrow to chase away the demons, buried and left the indent on the mound. To this very day, this place is considering as the “White Land,” or Sa Kawo. After Ngachen Ngawang Kunga Sonam’s visit to Lo, the festival regained its popularity and prior glory.